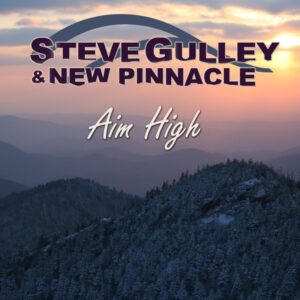 Included Tracks: Aim High, Deceitful Kind, Love Brings You Home, A Man Of Your Word, Go Ahead and Tell Me What To Do, Not Now, Mountain Swing, Living, Good Road, Closer to the Shore, Common Man's Train of Thought, Short Life Full of Trouble

Lyrics: Lyrics are NOT included with this music

Steve Gulley And New Pinnacle has been very busy since the launch of their self-titled debut album a little more than a year ago. The group received standing ovations for both their IBMA and SPBGMA Official Showcase performances and has charted five songs on the Bluegrass and Gospel charts including several Number 1 s from their debut album.

AIM HIGH features three Gulley co-written songs including two with his award winning co-songwriter Tim Stafford; Deceitful Kind , Love Brings You Home and Short Life Full Of Trouble co-written with Larry Shell and Kim Williams. In addition, Carl Jackson co-wrote three songs for the new album, in addition to great songwriters such as Larry Cordle, Jim Rushing, Sonya Isaacs, Becky Buller, Keith Sewell and more.
“With the success of our debut project, the guys and I knew the expectations would be even higher for our sophomore recording. With that in mind, we went about the business of writing and finding the very best songs we could with an even stronger intensity. We hand – picked songs from within the band and from some of the greatest songwriters our music has to offer. That being said, I couldn’t be happier with the new music we’ve created on “Aim High”. I am so proud of our debut album and see it as laying the foundation for our music and sound but, as is always the case, once you have a strong foundation; it’s time to start building on that. I really feel like we’ve done that with the new recording, while staying true to our band’s original sound. I’m so excited to share this, the next chapter, with everyone.” – Steve Gulley
Steve Gulley And New Pinnacle includes Steve Gulley (guitar, vocals) and Bryan Turner (bass, vocals), Gary Robinson, Jr. (mandolin), Matthew Cruby (banjo, vocals) and special guest Tim Crouch (Fiddle). AIM HIGH builds on the band s family heritage of strong roots in Bluegrass and Mountain Gospel and at the same time provides a new and fresh sound that further accents the STEVE GULLEY And NEW PINNACLE signature sound.

NOTICE! To receive a shipped product, change the option from DOWNLOAD to SHIPPED HARDCOPY.

This website uses cookies to improve your experience while you navigate through the website. Out of these, the cookies that are categorized as necessary are stored on your browser as they are essential for the working of basic functionalities of the website. We also use third-party cookies that help us analyze and understand how you use this website. These cookies will be stored in your browser only with your consent. You also have the option to opt-out of these cookies. But opting out of some of these cookies may affect your browsing experience.
Necessary Always Enabled
Necessary cookies are absolutely essential for the website to function properly. This category only includes cookies that ensures basic functionalities and security features of the website. These cookies do not store any personal information.
Non-necessary
Any cookies that may not be particularly necessary for the website to function and is used specifically to collect user personal data via analytics, ads, other embedded contents are termed as non-necessary cookies. It is mandatory to procure user consent prior to running these cookies on your website.
SAVE & ACCEPT